About Sophie the Therapy Dog 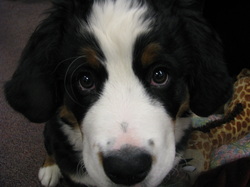 Sophie is a therapy dog in training who comes to CCMS.  She helps Mrs. Fleet's students feel good about themselves. Sophie is a Bernese Mountain Dog, she is a type of dog that is used to carrying things. She also had to learn not to pull on the leash because her breed is used to pulling carriages full of milk cartons. She is very kind to new people she sees. The thing I love about Sophie is when I'm working she comes to me and puts her head on my lap and then I scratch her body and her chin.  She loves it when you do all that stuff. I am glad we have Sophie because  when I get mad, she comes to me and lets me pet her or play with her. Every time I come in school, Sophie  runs up to the door and is waiting to see me when I walk in. Sophie loves the snow so much we nicknamed her " Snowphie." Bernese Mountain Dogs come from Mountains of Switzerland. That is why she likes the snow. 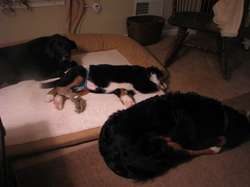 Sophie has a big family for a dog. She Has all of the students in our room as her family.  she used to have four dogs in her family. I'm going to tell you about her family. First was  Moe. Moe was a very funny dog. Mrs. Fleet would rev his ears like they were motorcycle handles and make a motorcycle sound and he would do the same thing.  He was very funny. Moe was sometimes a ding dong but he was very playful and Sophie misses him a lot.  Next is Cole- he passed away last fall.  Sophie misses Cole ,we don't really know Cole but Mrs. Fleet told us that every time Cole had a toy in his mouth, Sophie would run up and snatch it from his mouth and run away. Cole would just stand there and look and then get another toy. Next is Timer . Timer is a dog that we would have right now if we didn't have Sophie. We don't really know Timer but he is Sophie's real brother. They really never seen each other so I don't have anything  else to say about him except he went to the Westminster Dog Show.  Next is Sophie's mom, Taylor. We don't know about Taylor either, but she was on a dog show on T.V.. Last but not least, Sophie's owner, Mrs. Fleet, had a lot of dogs but now just two.  The  dogs she doesn't own are Taylor and Timer. We think it is time Mrs Fleet gets a new puppy to keep  Sophie company. 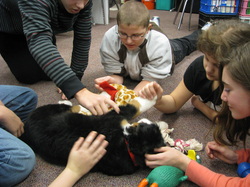 Sophie is learning many things .She is now learning to put her paws up when told to put them up. She is supposed to put them up on chairs. She is also learning to ring the school bell to get into the building. We have her put her paws on our legs and put a cookie on top of the bell. She pushes it with her nose. Sophie is walking really well on a leash for us but sometimes if she doesn't want to come inside yet she will flop over on to her back and lay there. When she doesn't do what want we ask her to do something else that we know she will do like sit and then we reward her for listening to that command. Then she is ready to listen to more things we want her to do. Sophie has passed her Canine Good Citizenship test and is now a certified Facility dog with Phoenix Assistance Dogs of Central PA. We will keep training her for her whole life.